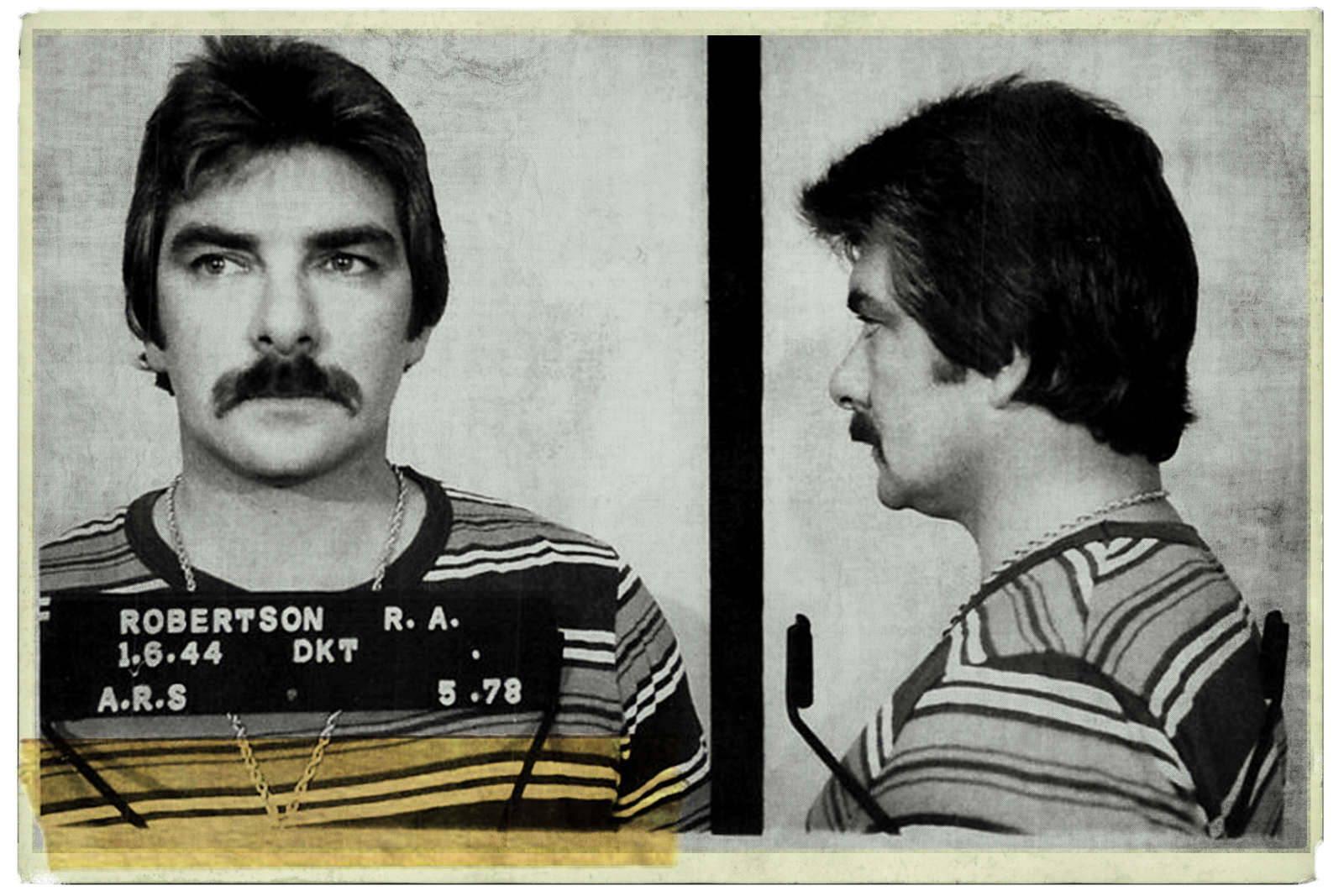 John Silvester’s original from The Age can be read here: https://www.theage.com.au/national/victoria/he-was-going-to-shoot-us-all-how-robbo-survived-undercover-20210318-p57buf.html

“Robbo” Robertson was a natural undercover cop. A Vietnam veteran with the gift of the gab, he slipped seamlessly into the role of Brian Wilson, an underworld heavy from Sydney.

One of his first undercover jobs was behind the counter at a shady club. When one villain confided he planned to shoot another gangster in the bar, “Wilson” suggested it wasn’t the best idea as the blast would hit others, “including me”.

“So what did he do? He stabbed him. There was blood everywhere.”

“Wilson” probably saved the victim’s life, stemming the bleeding by stuffing rags in the wound. The offender was arrested the next day.

His undercover partner was Graeme Henderson, who played Alan Phillips, a hippy-type dealer.

Robertson recalls their first meeting at a crook-infested bar in Carlton. “Hondo rocks in. He’s got a beard, John Lennon glasses, beads, jeans tucked into cowboy boots and a cowboy-style fringed jacket.

“I thought, ‘Jesus that has to be Alan Phillips’. I walked up and said, ‘G’day Alan’ and he said ‘Hello Brian’. We began playing pool, getting pissed and beating the crooks. I told him we’d better start losing or we will get a hiding here.”

Soon they set up a Clifton Hill flat and were a fixture in the St Kilda drug scene in their bright yellow VW beetle, buying stolen property and identifying key heroin dealers.

They loved to decorate the boss’s office at the Bureau of Criminal Intelligence (BCI) with stolen property until he would bark “get that out of here”. The boss was my father, Fred Silvester.

Soon Robertson was given a new mission: He was to go deep undercover to infiltrate Australia’s best armed robbery crew, the men behind the 1976 multimillion-dollar Great Bookie Robbery.

It would very nearly cost him his life and now – 43 years later – his bravery has been recognised with a prestigious Police Valour Award after a group of old colleagues lobbied on his behalf.

At BCI in 1978, he was told armed robber Rex James “Bicky” McAdam had approached a Mayne Nickless employee for inside information on payroll deliveries. The two men had met at Bicky’s club in Surfers Paradise and the crook was now pressuring the guard to leak information.

Robertson was employed at the security firm for about a month before he was introduced to “Bicky” by the original company contact.

Bicky McAdam was the front man but the real power lay with three others – Ray Patrick “The General” Chuck, Dennis William “Fatty” Smith and Linus Patrick “The Pom” Driscoll.

In the Bookie Robbery Chuck had been the mastermind, Driscoll provided the high-powered firearms and Smith was a getaway driver who later laundered the millions taken in the raid.

At an early meeting between “Brian Wilson” and McAdam at a coffee shop near the Victoria Market, McAdam left for a short time. “I was sitting having a coffee when I saw Chuck go by and then Fatty Smith go by. I thought ‘well, this is interesting’.

“Bicky came back and said, ‘They’ve had a good look at you and reckon you are all right’.”

“Wilson” was in. At the Werribee races he was introduced to “Kelvin” – another gang member. “He was a fit-looking bastard,” says Robertson.

Indeed he was. He was a vegetarian who ran 15 kilometres every morning. Though police didn’t know it then, Kelvin was none other than Russell Cox, who had escaped from Sydney’s maximum-security Katingal jail six months earlier.

Brian Wilson had upgraded from the VW to a flash Holden Statesman De Ville. From the back seat Cox, a counter-surveillance expert, observed: “You drive on your mirrors.”

“Wilson” responded: “I always do because you don’t know who could be following you.”

Wilson told the gang leaders he would tip them into a $600,000 payroll, at first refusing to identify the target. Having whetted their appetites he told them he was one of the drivers that delivered the Country Roads Board’s payroll to their office in Denmark Street, Kew.

With the hook set, Wilson said the job had to be pulled on May 4, 1978, because the payroll would swell to $900,000 due to penalties and a backdated pay rise. Wilson was to be paid 10 per cent of the haul with a down payment before the job and the rest, in clean money, the week after the raid.

“I told them it would be massive, that it was going to be huge,” says Robertson.

He drove Bicky and “Kelvin” to the building, which was already rigged with police cameras.

“I took them out to Denmark Street and told them next time we meet I’ll show you the layout. Kelvin said ‘I’ve already had a look.’ He’d put on an old dust coat and walked through [pretending to be staff]. No one noticed him. We used to do the same thing.”

The day before the expected raid, Wilson met with Kelvin outside the Victoria Market, where they were to rendezvous with Bicky for the down payment of $5000. This was the most dangerous part of the police operation, codenamed Osprey. Its final confidential report is missing from police files – but not from mine.

“This was a critical meeting and an extremely dangerous one for Robertson. In the circumstances that existed it was conceivable that he would be abducted and murdered. He had ceased to be of use to the criminal organisation. In fact, he had become a liability,” the report states.

Robertson was aware of the risks and invented his own insurance policy: “I told him I had notified my solicitor and if I didn’t turn up there physically he’s going to ring the cops. So you think about the money.”

Cox seemed impressed. “He said: ‘You are a smart one’.”

But at that moment a City West patrol car with three police in it pulled up. Senior Constable Bill Bandy was a good mate of Robertson’s and as he approached he realised the cop was undercover.

“I thought ‘Shit, here we go’,” Robertson recalls. “Bandy asked for identification and I produced mine as Brian Wilson and Cox pulled out his identification, which was a .38 long-barrelled revolver with his finger on the trigger.”

No one knew at the time that Kelvin was the escaped Cox, prepared to kill to remain free. “He was going to shoot us all,” says Robertson. “I have no doubt about that.

“I said, ‘Don’t shoot ’em, we’ll put them in the rubbish bins’. He said ‘good idea’. He knew shooting coppers would bring down a world of pain.

“I took their guns and pulled their radio out and threw them on the roof. Billy [Bandy] was saying ‘Give me a gun’ and I am whispering, ‘Shut up, he’ll kill all of us’.”

Then Kelvin/Cox started behaving like a character from a English war novel. “He said ‘You are a true Briton’ – then bang, he fired a shot in the air and ran off.”

Another police car arrived and Robertson ran to them with his hands in the air. “I told them to contact Detective Superintendent Fred Silvester at BCI by phone, but they did it over radio. All the crooks had scanners and were listening – that’s how they were tipped off.”

The next day the Special Operations Group lay in ambush at Denmark Street. But the gang had cleared out. Bicky went back to Queensland. Fatty Smith moved to Manila to run a vice bar, returning to Melbourne to be busted dealing drugs from his Rolls Royce, and Chuck was shot dead the next year inside the Melbourne Magistrates Court. Driscoll, probably the most feared for removing the toes of rivals with bolt cutters, was deported to Britain and Cox was arrested in 1988 at Doncaster – after 11 years on the run – planning another armed van robbery.

The Osprey review concluded that Robertson was almost certainly lured into the market to be killed and only the arrival of the police had stopped the shooting. It also found that without Robertson’s quick thinking, all four officers may have been killed.

“Constable Robertson’s disregard for his own safety may have very nearly cost him his life – perhaps Robertson and Bandy may have saved each other?” it concluded.

Robbo continued undercover but life on the edge was taking a toll. There were flashbacks, broken sleep and mood swings. About to enrol at inspectors’ college, he quit. He was 46 years old. “I was burned out. I had lost it. I had been through too many doors.

“I loved the police force and I am proud with what I did. These days if I feel the yips coming on I head for the bush. I love the open space.”

Postscript: This is one case where there was honour amongst thieves. Bicky sent “Brian Wilson” a postal note to the value of $500 for his out-of-pocket expenses. “I didn’t get to keep it.”

‘I no longer wear a uniform, but I still help those in distress’: Brett’s story

On the path to healing: Mark’s story