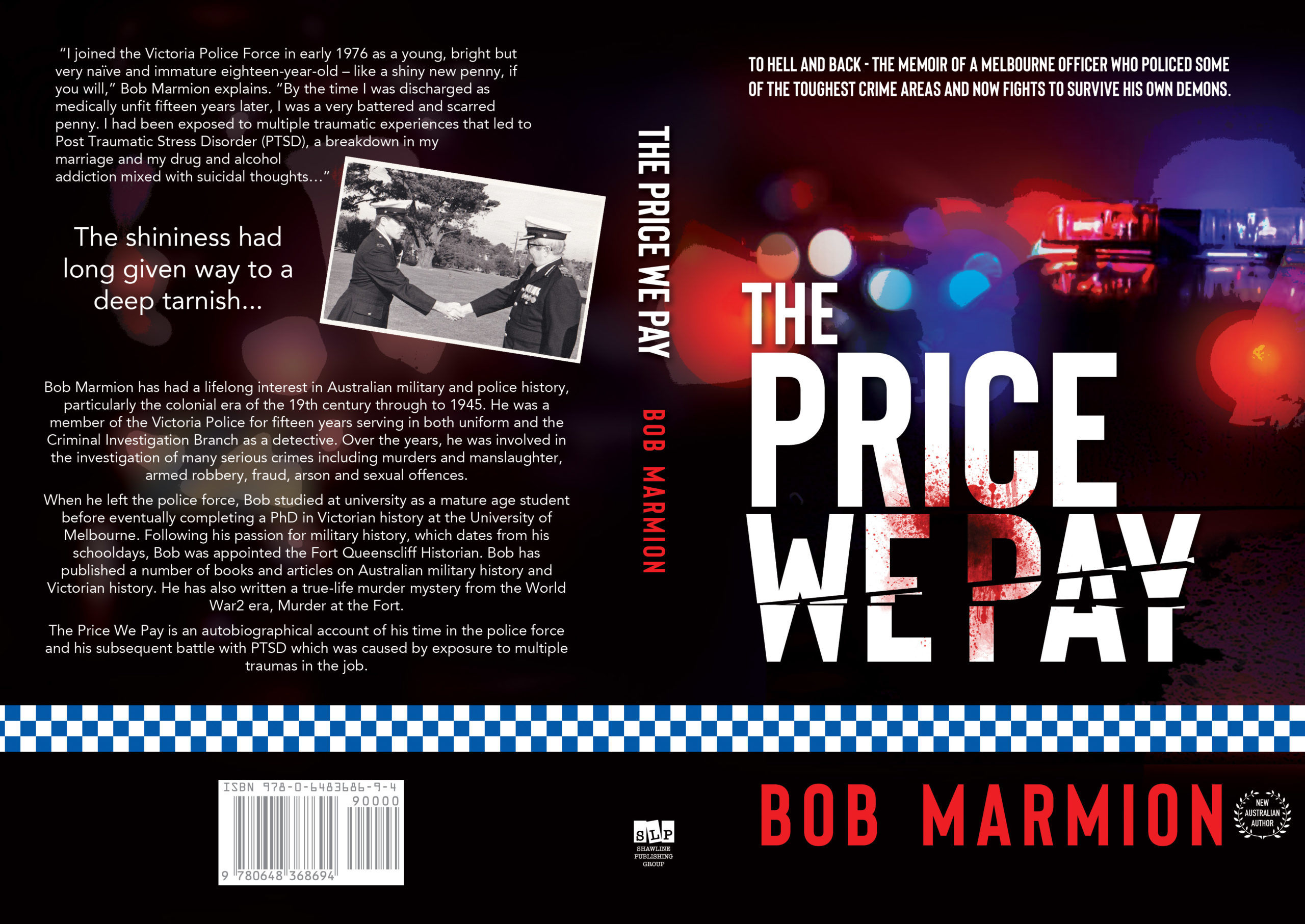 Set to be published in September, “The Price We Pay” tells the story of Bob Marmion, a uniformed Victoria Police member and detective facing PTSD, and the challenge of rebuilding his life. Read his synopsis below.

“The image kept repeating itself over and over. I was standing in a paddock at night listening for the noises. I was surrounded by loud, vicious dogs. I had to run. I had to do something. Turning away. I willed my legs to move. They wouldn’t. I felt like I was going to collapse. Suddenly the dogs had parted and there was a man crouching in the long grass. The dogs had been herding me towards him. I was going to be OK after all. I looked at the man and froze in terror. He was pointing a shotgun at me. Without saying anything he fired both barrels. Everything suddenly went blank. I snapped awake, shaking and sweating. Was I dead or alive?   It was the same nightmare that kept coming back night after night.

I often wondered how did it come to this? I joined the Victoria Police Force in early 1976 as a young, bright but very naïve and immature eighteen year old – like a shiny new penny, if you will. By the time I was discharged as medically unfit fifteen years later, I was a very battered and scarred penny. The shininess had long given way to a deep tarnish.

In that time, I cheated death so many times. If I was a cat, I would have only one life left.

The book is about the real life experiences faced by a typical member of the Victoria Police Force. Some are funny, others are scary, all are brutally honest. The accounts give an insight into the daily life of a young constable in uniform and later, a detective in the Criminal Investigation Branch. I loved my job; it meant everything to me. I just didn’t realise it was also going to kill me given the chance.

The book goes further than just being a blow by blow account of fighting crime. It traces my journey from a young constable to a physical and mental wreck with complex Post Traumatic Stress Disorder or PTSD as a result of the incredibly dangerous workload of being a detective in Melbourne’s crime riddled northern suburbs. I faced the worst humanity had to offer – brutal, uncaring and vicious behaviour that was repeated over and over. I saw and experienced things that no one should have to.

Whilst the book gives a unique insight into real life policing, it also documents the cost – in effect, the price we pay for law and order. Whilst set some decades ago, it still has a great deal of relevance to today. Not much, if anything, has changed. Police are still ravaged by PTSD as a result of going about their daily duties. As a result, many are left traumatised and unable to work. Too many take their own lives.

An important part of the book is the recovery process. I reached the absolute bottom of the pit, affected by drug and alcohol addiction and contemplating suicide. Slowly but surely, over a thirty year period, I have dragged myself out of the pit and rebuilt my life. Though still burdened with PTSD and the nightmares of my service, life is good.

The book outlines my journey and experiences, good and bad, and the long road back to having a “normal” life. If my book can shed light on the difficulties that police veterans face, then I believe it will be a positive outcome.”